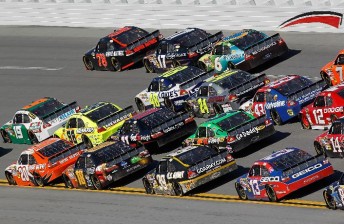 Talladega is considered the wildcard of the Chase for obvious reasons

NASCAR has announced its schedule for next year’s Sprint Cup, featuring several changes from the 2011 season.

Most notably, the Talladega and Kansas Chase races will swap dates in order to accommodate the repaving of the Kansas track.

Kansas’ spring date has also been moved to be the eighth race of the season on April 22, having hosted the 13th race this season.

Other changes see the season’s first Phoenix International Raceway and Las Vegas Motor Speedway races moved back a week, while the timing of the spring Texas and summer Daytona events have also been tweaked – the latter switching dates with Kentucky.

The changes join the previously announced Daytona Speed Weeks change, which will see the non-points shootout race and Daytona 500 run a week later than they were this year.

See below for the full 2012 NASCAR Sprint Cup schedule