Small will work with the #55 team at Bathurst

Small, who also has V8 Supercars Championship experience with Garry Rogers Motorsport and Paul Morris Motorsport, will work on the #55 The Bottle-O Racing Falcon at the upcoming Supercheap Autos Bathurst 1000 before moving into a design role for the remainder of the year.

The move comes amidst speculation that Reynolds will drive The Bottle-O backed Ford in 2012.

“We’ve been looking for an additional engineer for four or five months now, so we’ve been in the market for a while,” FPR team principal Tim Edwards told Speedcafe.com of Small’s appointment.

“We took our time finding the right person and James had been keen to join the team for some time. 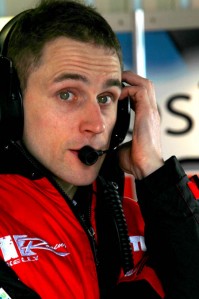 “James joins the team as an engineer, and was part of our pre-briefing for Bathurst this morning.

“He will be at Bathurst helping out on the #55 car, but for the remainder of the year he will be in a design role.”

Following a difficult first half of the season, FPR experienced a mixed weekend at the recent L&H 500 at Phillip Island.

The #6 Trading Post car driven by Will Davison and Luke Youlden provided the team with a pole position and a podium finish, while the Mark Winterbottom/Steven Richards and Paul Dumbrell/Dean Canto entries came home 17th and 23rd respectively after a variety of problems.

According to Edwards, the factory Ford squad will head to Bathurst believing it can topple the TeamVodafone juggernaut, which repeated its one-two finish from last year’s Bathurst 1000 at the Phillip Island event.

“It would be absolutely wrong of us to go there with any other attitude – we’re going there with the belief in ourselves that we can do it,” said Edwards of beating TeamVodafone.

“Phillip Island was a good result for us but it wasn’t a great result, and until we’re standing on the top step of the podium and with both cars up there then we won’t be happy.”

The Supercheap Auto Bathurst 1000 will take place over the October 6-9 weekend.