Euro to take on leading Aussies in Kalgoorlie

Euro to take on leading Aussies in Kalgoorlie 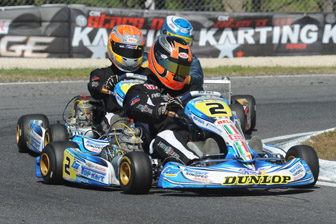 Leading European karter Roberto Tonninelli is one of a host of leading karters set to compete in the Kalgoorlie ‘Dash 4 Cash’ this November.

The feature classes – KZ2 Rollasole Invitational and KF3 Meritus.GP Cup – will see the creme of Australia’s kraters compete. In KZ2, Matt Wall, Jordie Lindstrom, Kyle Ensbey, Macauley Jones, Justin Ruggier, Hayden Patrizi, Daniel Currey and Jason Pringle will fight for honours against defending champion and top European Tonninelli. Over the KZ2 karts are expected to enter. Over $10,000 in cash will be awarded to the top four, plus prizes for pole and lap record.

In the KF3 class (making its WA debut), Jake Klarich, Anthony Martin, Joseph Mawson, Jake Coleman, Pierce Lehane and Cameron Hill are the likely front-runners. The KF3 runners will be competing for a two day test with Meritus.GP, to be run at Sepang international Circuit in the JKRAS car (formally Formula BMW). The exclusive test includes two sets of new tyres.

The big bonus for eastern state competitors is that all freight will be paid for those drivers competing in the two classes.

Patrizi says that the race meeting is a “must” for all top-line karters.

“We have huge prizes on offer – from cash to the test at Sepang. It is the richest prize pool in Australian karting and it has already attracted some of the best names from the sport. It’s going to be super competitive.”

Limited places remain for entry into the Kalgoorlie ‘Dash 4 Cash.’ The event will be held on November 4-5.