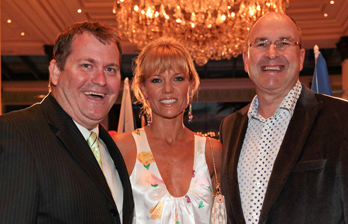 V8 Supercars Chairman Tony Cochrane received one of the few genuine surprises of his life last night when he was greeted by 60 friends and colleagues at a Gold Coast restaurant.

It was no special birthday, but a boutique celebration of Cochrane’s 15-year leadership of the V8 Supercars formula.

Cochrane arrived at the restaurant with wife Thea and V8 Supercars acting CEO Shane Howard and wife Bernii believing he was meeting with Archer Capital bosses Andrew Gray and Brad Lancken before today’s schedule board meeting.

He walked into the room to be greeted by a guest list featuring a calendar of faces that have all had a relationship with Cochrane during the history of the sport.

The night was hosted by V8 Supercars legend Mark Skaife and former driver and now media personality, Neil Crompton, who were keen to roast as well as pay tribute to the sport’s beloved leader with some genuine and mock telegrams.

Cochrane was presented with a bound book which contained personal letters, messages and images from many stakeholders through the history of the sport.

A collage of images played on screens providing a visual history of the sport and a tribute video provided a few laughs and differing hair styles and spectacle frames.

“What an amazing surprise. I honestly had no idea,” said Cochrane.

“It is terrific to see so many faces here who have all played a role in the development of this sport.

The stories flowed for several hours – and no doubt a few lies!