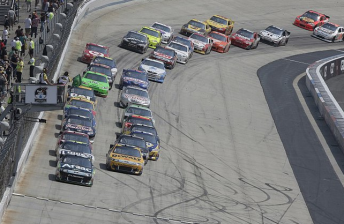 Marcos Ambrose (front right) finished third at Dover in May

Marcos Ambrose hopes the same car that he took to third place at Dover in May will put him in a competitive position at the track this weekend.

The #9 RPM team has prepared chassis #754 for the 400 mile event at Dover International Speedway – the same car he scored his brilliant third place earlier this year. The chassis has also run previously this season at Martinsville and both Pocono events.

After a couple of horror rounds, the Richard Petty Motorsports driver wants to repeat, or even improve on his results at ‘The Monster Mile.’

“I enjoy short-track racing and this race can get pretty intense.

“We had a great car there in May and were taking that same car back this weekend. It’s a physically demanding race track and its a track with a lot of banking.

“If we can survive The Monster, we’ll be in good shape this weekend.”

Ambrose says he’d like to have the Monster Mile’s “cool” first place trophy in his cabinet.

“Dover has a really cool trophy and I think it would look pretty good sitting in the shop on Monday,” he said.

“I know Todd and the rest of my Stanley crew have worked hard to set me up with a fast car on Sunday, and I feel like this is the weekend for our luck to change.”

Ambrose had had one NASCAR win this year (Watkins Glen) and sits 23rd in the points standings.