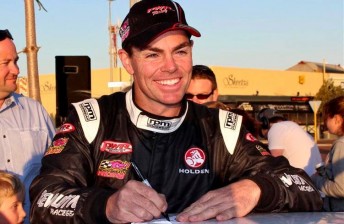 Craig Lowndes has swept all three stages on the longest distance day of the Australasian Safari, with competitors completing 662 competitive kilometres in a looped course around Laverton in Western Australia’s northern goldfields on the edge of the Great Northern Desert.

Autos
It was a strong day for Lowndes and John Panozzo in the Holden Colorado, winning each of the three stages and increasing their lead time over Steve Riley and John Doble to 19 minutes overall.

“I had a good day. The first stage was challenging navigationally and a bit rough, but not as rough as Leg 1,” said Lowndes.

“The second stage was good, nice sandy tracks that opened up and were fast. There were some rutted out areas from all the recent rains, which created some obstacles. The car is running great and we are limiting our mistakes which is only helping.”

Riley and Doble in the Pajero are still going strong in second position.

“We had a good day. It rained on the last stage – bucketed down actually. I don’t think we made up any time on Craig (Lowndes) today but we are going as quick as we can,” said Riley.

The Team AAAC Racing team of Adrian Dilallo and Rob Masi had a good day placing third fastest in the first and last stage and retaining fifth overall position. Motos
Leg 4 was South Australian Shane Diener’s day, winning all three stages on his Yamaha WR450. Jacob Smith and Todd Smith swapped second place in the stages, with Jacob second fastest in two of the three. Todd Smith is still in the overall moto lead by approximately 10 minutes.

“Today was pretty fast and the navigation wasn’t too tricky,” said Diener.

“We caught a bit of rain, there were pools of water on the track but this didn’t cause any problems. The bike is going well which helps!”

The Smith brothers from country New South Wales both enjoyed the sandy tracks and fast pace and are enjoying both being on the same team this year.

“Today was fun, I enjoyed it,” said Todd Smith.

“I like going fast. The only downside is it’s hard to increase lead-time when the navigation is easier.

“I’m happy to have a bit of a gap now that we’re over half way so I can ease off a bit.”

Rod Faggotter is managing to hold onto fourth fastest position despite having a broken hand sustained in Leg 2.

Dakar champion and first-time Safari entrant Cyril Despres is holding onto fifth position overall and is still getting on top of a different style of racing.

“This is not the race I was expecting and I am taking it like a training day – not pushing to ride as fast as possible,” said Despres.

“I enjoyed the sandy tracks and was able to test the bike a bit.”

Quads
John Maragozidis owned the Quad leg on his MMR Interceptor winning all three stages after race leader Colin Lawson struck mechanical issues on the second stage today and was not able to complete the Leg, a devastating blow after gaining a strong lead on the first three Legs of Safari.

“Today was God’s gift to quads! We had fantastic conditions and awesome tracks,” said Maragozidis.

“I made a small navigational error that only cost a couple of minutes. I need to keep having days like today.”