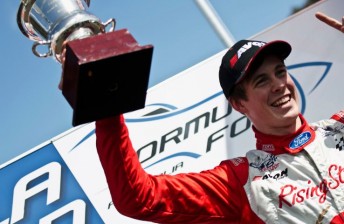 The 19-year-old will link-up with Jamun Racing for his British sojourn, which has won the last seven consecutive British Formula Ford titles.

According to Le Brocq, racing at the Silverstone and Brands Hatch events will prepare him for a full-time drive in the United Kingdom next year.

“I have chosen to go to England and race as I think it will offer me the best chance of proving myself to the international scene and to get my name out there so that I can progress further up the open wheel rankings,” said Le Brocq.

“British Formula Ford or the Formula Renault 2.0 series would offer me the best chances at breaking into the European scene, and they have proved great feeder categories into the higher levels of racing throughout Europe.

“I have been speaking with many teams across England and Europe about my plans for the 2012 season, and we are still working on what could be the best option for us depending on the budget that we can secure for the season.

“This is something that I’ve been aiming for, for so long and to finally have this opportunity is awesome! I know it is going to be a massive challenge, but going off the form we have had in recent rounds, I think anything is possible and I believe I can take it to overseas and show them just how it’s done in Australia!”

The Australian Motor Sport Foundation’s CAMS Rising Star program switched from running the locally built Spectrum to the French Mygale chassis this season – citing the possibility of a closer relationship with the Jamun team as a result.

The Australian Formula Ford Championship continues at the Armor All Gold Coast 600 on October 21-23.