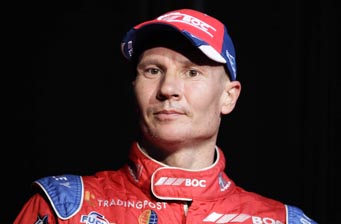 Jason Richards has enjoyed two wins this week. The first came at the doctors, who gave him the news that between scans, the growth of his cancer has stopped.

The second win came when he received a phone call from the Touring Car Masters organisers who secured him a ride in Tony Hunter’s HQ Holden.

Speedcafe.com’s Grant Rowley spoke to Richards about his Bathurst drive next weekend and an update on his battle with cancer.

SPEEDCAFE: You’ve said for a long time that you’ll be at Bathurst – not in the 1000km race – but you will be actually competing in the Touring Car Masters …

JASON RICHARDS: Yeah, and I can’t wait. The Touring car Masters guys have been really keen on getting me to run one of thier cars.

John Bowe and Tony Hunter were the instigators of it. They’ve got it up and running. Tony is lending me his HQ Holden, and a camper van, so we’re going to do a bit of a family trip up to Bathurst. 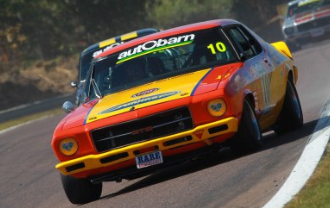 The Tony Hunter HQ that Richards will drive at Bathurst

As you know, I was going to go to Bathurst anyway to be with Team BOC, but I found at Phillip island that there’s a fair bit of standing around when you’re not participating!

I’m looking forward to it. I enjoy racing those types of cars. I enjoyed racing in the Muscle Car Masters in the Torana, and that is one of the reasons why this came up.

It will be great racing JB, Andrew Miedecke, Jimmy Richards, Glenn Seton – a bunch of blokes that I’ve raced against before. It will be a lot of fun. I’m not doing it for any reason other than enjoyment, and Touring Car Masters have been kind enough to do a lot of work to get me on the grid.

SPEEDCAFE: It’s a very diverse class of racing. Was racing a Holden a key element to it?

RICHARDS: Of course. I’ve obviously got a long association with Holden so there was no other choice for me. I can’t wait to get into it.

SPEEDCAFE: There will be about an hour of Touring Car Masters racing over the weekend. Certainly not as much as what you’d do in the Bathurst 1000. How will your body take it?

RICHARDS: I can survive small hits. There’s no way I could survive a double stint in the main race, or do something like Lowndes did last year.

Generally, these cars will be easier to drive than a V8 Supercar. Physically, it shouldn’t be an issue. The races are only six or seven laps long, so it’s quite different to running main game. Those short races will be fun. The long stuff in a V8 wouldn’t stretch me, and I don’t even want to give that a go at the moment. That’s not the direction I want to go in life.

At the end of the day, I’m still a racer. I still love racing and I’ll take these opportunities as they arrive and I’m very fortunate to get them.

When I’m in a race car, it makes me feel cancer-free, and by racing around Bathurst will take away a little bit of the pain of not being in the main event.

SPEEDCAFE: Before I switched the recorder on for this chat, you said that you’d received some relatively good news on your cancer situation.

RICHARDS: Yeah, it was needed. I was coming to the end of my mental strength. Every time I went to the doctor, I felt like I was getting wacked over the back of a head with a baseball bat. He’d always say “very significant growth.”

Finally we got one where there was no growth or no change, which effectively means we’ve got a break in the cancer.

I really needed that and it’s a great break for me.

Hopefully we can improve on that and it means we’ve got somewhere to go. It’s exciting.

SPEEDCAFE: Excellent news. Now, your Bathurst 1000 tip. Take your Team BOC hat off for a moment! Who is going to win this year’s Supercehap Auto Bathurst 1000?

RICHARDS: You just can’t take those Vodafone cars out of your mind when you ask that. They are both extremely good, but if I had to pick one of them, the Lowndes/Skaife car just continues to deliver. It wasn’t that long ago that we thought they’d lost their edge, yet it comes to this time of year and they deliver results.

The smart money will be on those guys. Craig is having the best years he has ever had and you’d be pretty foolish to bet against them.

The Whincup/Thompson car will be strong too, but I truly believe the BOC car will be up there. The BJR boys proved at Phillip Island, in those longer races, they have plenty of pace. They just have to make sure they have a smooth run, which seems to be a bit of a drama for them.

The FPR and HRT cars will be there with a chance. What I noticed at Phillip Island was the factory cars all came to the front, and we haven’t seen that for a while. Besides the TeamVodafone cars, they were really the guys to beat, and the big race is probably going to be the case again.

Nick Percat did an amazing job, and there’s no way you’d take them out of the mix. The HRT cars go extremely well, so I think it will be an exciting year.