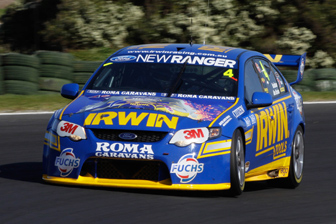 IRWIN Tools has renewed as the naming rights backer of the #4 Stone Brothers Racing Ford Falcon in the V8 Supercars Championship for a further two years.

The new deal means that IRWIN Tools will be the lead sponsor for new 2012 SBR driver Lee Holdsworth, who will be revealed soon as the replacement for current driver Alex Davison.

IRWIN, manufacturer of hand tools and power tools accessories, first joined the Queensland-based champion V8 team for the 2009 season and has been the naming rights for the past three years.

The re-signing comes at a time where Davison and the IRWIN Racing Falcon are enjoying their best position in the championship, currently ninth.

Davison will team up with Australian international driver David Brabham at the Supercheap Auto Bathurst 1000 next weekend (October 6-11).

“IRWIN Tools is one of the fastest growing tool brands in the market thanks to our association with Stone Brothers Racing and V8 Supercars,” Pritchard said.

“Our sponsorship of SBR has allowed us to create an effective and successful leverage programme that has benefitted our current customers and helped us develop relationships with new customers.

“Such is the success of the sponsorship it makes perfect business sense to extend our current relationship with SBR and look forward to another two years.

“Off the track, staying in the sport gives us a strong internal and external leverage base that will continue to build brand awareness and, importantly, increase sales.

“On the track, we want to win races. The results have started to come but we are looking forward to improved performance over the next two years.”

The other advantage of extending its sponsorship with Stone Brothers Racing beyond 2011 is the sport’s constant international expansion – particularly into the Unites States.

“IRWIN Tools’ parent company in America has always been impressed with the way in which we market and leverage our V8 involvement.

“Going to Texas to race in 2013 is one of the reasons why we extended our sponsorship with SBR.

“Americans love their motor sport, when they see IRWIN Tools on an Aussie V8 I’m sure they will back us and the sport.”

SBR Team Principal Ross Stone is poleased to have IRWIN Tools on board for a further two seasons.

“Everyone at Stone Brothers Racing is delighted to have IRWIN Tools re-sign for another two years,” said Ross Stone.

“IRWIN Tools is a good strong brand and the quality of the brand and their products are a good fit for us as we regard Stone Brothers Racing as a blue collar team and we regard IRWIN Tools as a top shelf sponsor.

“Maintaining our relationship beyond the initial three years gives us the longevity and continuity that every professional V8 Supercar team strives for in a sponsor.

“We are also thrilled to see that they wanted to stay with us. We have a solid relationship and a strong sponsorship foundation that we can continue to build upon.

“We are looking forward to the years ahead and of course giving IRWIN Tools some wins at the track.”

IRWIN Tools entered V8 Supercars in 2007 when it joined Jason Bright’s Britek Motorsport team. It had the naming sponsorship of one car within the team, initially driven by Alan Gurr and then Marcus Marshall.

Towards the end of 2008, IRWIN Tools signed a sponsorship agreement backing the #4 SBR Ford Falcon for three years between 2009 and 2011.

IRWIN Tools will continue to enjoy naming sponsorship rights of the #4 SBR Falcon in 2012 and 2013.