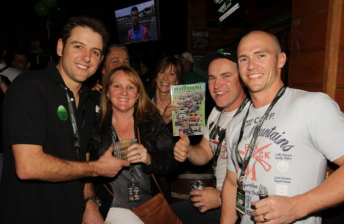 After the outstanding success of the inaugural party at Townsville, Queensland in July, the Greenroom is coming to the Gold Coast, to be held after the Armor All Gold Coast 600.

When the race ends … the party begins!

You can join Speedcafe.com and its guests at the Titanium Bar, Surfers Paradise, from 8pm on Oct 23.

There will be live entertainment, prizes and giveaways.

Limited tickets are available, so CLICK HERE to ensure your spot at the coolest place on The Coast on Sunday evening.

Jack Daniel’s Racing’s Todd Kelly was one of a host of V8 Supercars drivers who attended the Townsville Greenroom party. He says that if you are on the Gold Coast for the unique international-flavoured race, the best way to wind down from the track action will be in the Greenroom.

“The Surfers Paradise race is always a huge event – on and off the track,” Kelly says.

“It doesn’t matter if there’s cars on the track or not, the whole race meeting has an electric atmosphere.

“The Gold Coast is one of the best places in the world to have a party, and having been to the Greenroom in Townsville, I reckon this next one will be one you won’t want to miss.”

See below for video from Speedcafe.com’s inaugural Greenroom after party at Townsville.