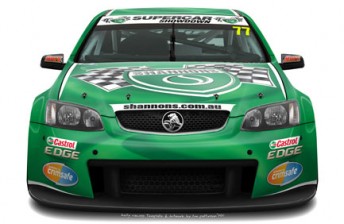 Castrol EDGE has announced it will support Kelly Racing’s Shannons Mars Racing entry at the Supercheap Auto Bathurst 1000 at Mount Panorama this October 6-9.

Castrol EDGE will also become a partner of Shannons Supercar Showdown, the reality television series that has seen 10 young contestants compete for the chance to drive alongside the show’s host Grant Denyer in the Shannons Mars Racing Holden Commodore V8 Supercar at Bathurst.

One of those two drivers will be announced on Sunday afternoon as the winner of the drive alongside Denyer.
Sue Dilger, Marketing and PR Manager for Castrol said that Castrol EDGE was keen to support initiatives that promote new driving talent.

The side of the Shannons Mars Racing entry

“We are happy to be involved in promoting young talent and Shannons Supercar Showdown is definitely a fantastic way to offer a group of aspiring racing drivers the chance to make their V8 Supercars Championship debut at Bathurst.

“Castrol is a big supporter of young drivers and grass roots level of motorsport, highlighted by our naming rights partnership with the Castrol EDGE Stars of Karting Series.

“The Shannons Supercar Showdown TV series also shows the contestants and viewers at home that there is certainly a lot more to being a V8 Supercar driver than simply driving the car. There is a lot of hard work, discipline, focus and dedication required day in, day out if you want to follow in the footsteps of guys like Greg Murphy and Todd and Rick Kelly.

“It’s an exciting initiative and we look forward to working with Todd, Rick and all of our friends at Kelly Racing over the coming weeks as we get closer to the Supercheap Auto Bathurst 1000.”

Kelly Racing Commercial Director Rick Kelly was pleased to further strengthen the relationship between Castrol and his and brother Todd’s V8 Supercars operation.

“Castrol has been a big part of Kelly Racing right from the first day we opened the doors,” said Kelly.

“Some of the more experienced members of our team have worked with nothing but Castrol products for over 20 years, and all five of our Commodores will head to Bathurst this October with Castrol lubricants onboard.

“It’s great that Castrol EDGE has jumped onboard with Shannons Mars Racing and Shannons Supercar Showdown.

“It is very hard to launch programs that bring on young driving talent so it’s fantastic that our friends at Castrol share our passion for developing the next generation of V8 Supercar stars.”

Shannons Supercar Showdown screens at 5pm each Sunday on 7mate, with the final episode to reveal the winner to air on Sunday October 2nd.

See below for a preview of the Shannons Supercar Showdown.