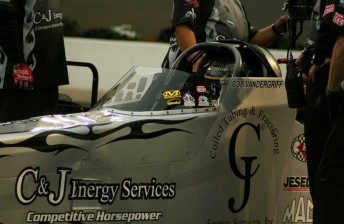 Top Fuel
Appearing in his 14th final round, Vandergriff ended the longest streak of final-round appearances before a win in NHRA history. Vandergriff powered his C&J Energy Services dragster to a 4.243 at 238.44 to hold of hometown favourite Spencer Massey in the final round.

“We’ve lost finals every way, and you begin to question it,” said Vandergriff.

“But I’ve got a great bunch of guys with me now, and I knew it was going to happen, I was just hoping it was this time.

“I don’t think I could take another speech where I say, ‘Well, it’s all right,’ because it’s not all right. But it’s great. I’m just a little overwhelmed right now.”

Massey’s final-round appearance moved him to the top of the Top Fuel standings, just seven points ahead of second-place driver Antron Brown, who fell to Massey in the semi-final round of eliminations. Massey is the 41st different driver in NHRA history to lead the points in Top Fuel.

Funny Car
Cruz Pedregon raced to his first win of the season and moved into the third spot in the Funny Car point standings. He held off an impressive line-up of cars to reach the final round, driving his Snap-on Tools Toyota Camry past Todd Simpson, Bob Tasca III, and Melanie Troxel on his way to a final-round match-up with Ron Capps. In the final Pedregon drove to an impressive 4.200 seconds at 302.48 mph past Capps to secure his first win of the season and 29th of his career. The win also propelled Pedregon from fourth to third in the point standings, just seven points behind leader Mike Neff with four races left in the season.

“The car was just so good all weekend,” said Pedregon.

“I think this is probably the best race car I’ve ever had, with the exception of one run. We slipped up in the semis against Melanie.

“The track was hot, the hottest it’d been all weekend, and we got a little too aggressive with it. But other than that, the car was great, and I think I felt more pressure because we had such a great car. But it was great to win, finally.”

Funny Car points leader Neff lost in the first round to second-place driver in the standings Matt Hagan. Hagan was unable to get around Melanie Troxel in the second round though, and only four points separate first-place Neff from Hagan.

Pro Stock
In a repeat match-up from the Pro Stock final round in Charlotte just one week previous Jason Line and Kurt Johnson met again in the finals, but this time it was Line who powered his Summit Racing Pontiac GXP to a 6.633 at 208.46 to get his fifth win of the season and 26th of his career. The win also helped strengthen Line’s lead to 112 points over second-place driver and KB Racing teammate Greg Anderson, who lost in the first round.

“Right now, I guarantee you that there is no way that anybody can be happier than me right now. It’s just not possible. It was a big day for us. The fact that we could actually get it done was amazing.

“I drove like garbage all day long. I was the worst I’ve driven all year. Finally, I managed to pull myself together for the final, the time that we needed it, and made a great run at the same time. It was just a really big day for us.”

Pro Stock Motorcycle
In Pro Stock Motorcycle, Phillips held off rookie rider and Mac Tools U.S. Nationals presented by Lucas Oil winner Hector Arana Jr. when he rode his The Edge Suzuki to a run of 6.979 at 194.96 to secure his first win in more than a year and move up to the seventh spot in the point standings. Arana moved to the third spot in the standings with his runner-up finish to Phillips.