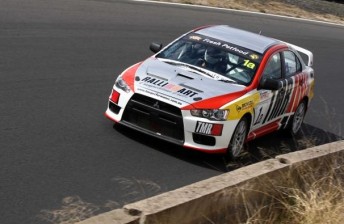 Stuart Kostera has set the pace in the 2011 AMC

Australian Manufacturers Championship organisers are looking for a place on the V8 Supercars support bill as part of a revamp of the production car class next year.

The 2011 AMC is being run over a five round series, encompassing two events with the Shannons Nationals, one with the Victorian State Circuit Racing Championships and two stand-alone endurance races.

According to Aaron McGill, who promotes the AMC alongside wife Angela in addition to racing in the Fujitsu V8 Supercars Series, an expansion to six rounds is on the cards.

“We are working 24/7 to ensure the AMC ticks all the boxes for competitors in 2012,” said McGill.

“I have a strong belief that the world economy will lead drivers to our production based endurance championship in the future, as we provide great value for money racing.

“We are talking with V8 Supercars regarding an opportunity to entertain their crowd at an event or two next year.

“I’ve been a driver in the Fujitsu Series for 10 years and I think I know what V8s require from a support category.”

While any appearance alongside the V8 Supercars would almost certainly use a sprint format, the 2012 championship will again feature a variety of event structures, with rolling starts and night races (likely for Mallala) potentially among the additions.

McGill says 38 expressions of interest have already been lodged for the December 11 8 Hour race, which will be run on the Sydney’s venues short circuit.

“I’ve been trying to get the whole AMC fleet onto the paddock at the one time for the past two years, so let’s hope 30-plus cars take the start,” said McGill of the season finale.