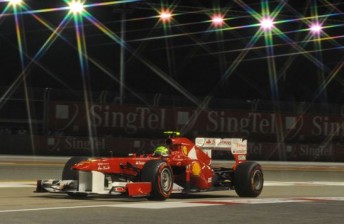 Having made similar comments about Hamilton after Saturday’s qualifying session, where the Briton passed the Brazilian while the top runners jockeyed for track space in Q3, the pair collided on Lap 12 of Sunday night’s race.

Hamilton and Massa were both severely hampered by the incident, which broke the front wing of the McLaren and punctured the right-rear tyre of the Ferrari –  seeing the two drivers eventually finish the race fifth and ninth respectively.

“I was on the straight and he touched me, not even when he was on my side – he touched me when he was behind me,” recalled Massa of Hamilton’s attempted overtaking move, which resulted in a drive-through penalty for the latter.

“Then, when I got to the end of the braking, my tyre was already punctured. For sure it was a big, big problem for my race. And he paid for that as well, so what can I say?

“How many races this year he did this? He went in the wrong direction and he paid and he never learned. The FIA is looking for sure for that, because he is doing that so many times.”

Last night’s fireworks between the pair continues a feud that stretches back to the Monaco Grand Prix, where contact saw Massa’s race end against the outside wall in The Tunnel.

According to Massa, confronting the 2008 World Champion after the Singapore race drew little response.

“I think he is not learning. I tried to speak to him after we wait, but he didn’t listen to me,” said Massa.

“I called him two times, but he didn’t listen to me, he (went) past me. He didn’t even look to me.

“I called him to speak, but when I show him, I said, ‘very good job, well done’. Like that you will win many championships!”

While no further penalities were levied to Hamilton or Massa following the race, Michael Schumacher was reprimanded for his collision with Sergio Perez, Lotus Renault GP was fined 7,500 Euros for instructing its driver Bruno Senna to line-up in the wrong position for the mid-race Safety Car restart, and Team Lotus was fined 10,000 Euros for releasing Heikki Kovalainen into the path of Sebastian Vettel following the race leader’s final pitstop.

The 2011 Formula One World Championship continues at Suzuka, Japan, on October 7-9.