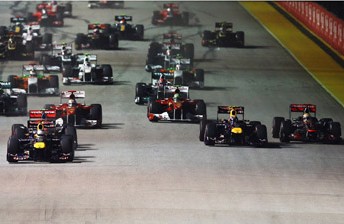 Webber (centre) struggles off the line at Singapore

Australian Formula One ace Mark Webber says that he must work on his race starts if he is to win another race.

The Red Bull racer, who finished third in last night’s Singapore Grand Prix, was again swallowed up at the start of the race, losing two positions before the first corner.

It has been the tale of his 2011 season – qualifying towards the front but, more of then than not, losing spots.

Renowned as one of the best starters in F1, Webber’s ‘lights out’ form is something he has flagged as an issue that needs to be addressed.

“For some reason I’m not able to make the starts I made last year,” Webber said.

“We’re working hard to improve the situation, but too often I’ve been left to fight my way through the field. That’s not such a problem at tracks like Shanghai and Sepang because it’s possible to overtake there. But Marina Bay and Monaco are the two most difficult tracks on which to overtake and I spent more than 30 laps looking at Fernando’s gearbox.”

Overall, Webber was please with the result, given the fact that he considers this circuit one of ‘his’ toughest venues.

“I’m pretty satisfied with that,” he said.

“Marina Bay has always been a tough venue for me and to come away with a trophy – albeit not the biggest one – is still a good result. It was hard work out there in the heat and it was a great effort by the team to get both cars home on the podium.”

In last night’s race, Webber’s team-mate Sebastian Vettel won the race and is now one point from clinching the world title.

Webber, Fernando and Jenson Button are separated by just three points in their fight for second place. With five rounds to go, Webber is keen to finish in the runner-up spot.

“I can no longer win the world title but I’m very motivated for the last five races of the year.,” he said.

“I want to win and I want to end the year with some momentum. Once Seb is champion, the next mini-goal for the team is to try and get me into second place.

“I like the circuits that come next on the calendar – all of the drivers love Suzuka because it’s a beautiful circuit with lots of fast changes of direction and undulations. I pushed Seb over the line there in 2010 and would like to get my nose in front this year.”