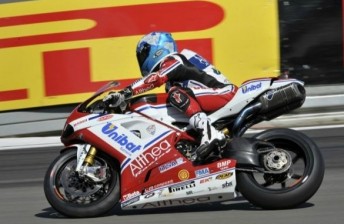 Despite a race win and a third place finish at Imola in Italy, Spain’s Carlos Checa will have to wait until at least the next race at Magny-Cours in France to clinch the World Superbike Championship.

Behind the leading two, Checa (Althea Racing Ducati) scored an important podium but had to wait until the final lap to get the better of the impressive Tom Sykes (Kawasaki Racing Team Superbike).

Championship hopeful Marco Melandri (Yamaha World Superbike Team) was only eighth, after getting involved in several fights in the middle order of the first 21-lap race of the day.

Checa won the second dramatic race of the weekend, but Melandri’s sixth placing was enough to keep his slim championship hopes alive.

Rea was on course for his second race win before his machine stopped while leading. Haga took his second runner-up place of the day, while Leon Camier (Aprilia Alitalia) earned a podium. Eugene Laverty (Yamaha World Superbike Team) was fourth.

In the championship Checa is 97 points clear over Melandri and two rounds left in France and Portugal.