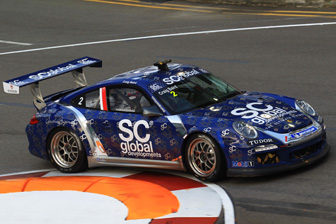 Craig Baird had a strong hit out before a big weekend at Bathurst in two weeks time when he finished with a pair of seconds in the Porsche SC Global Carrera Cup Asia events, which were part of the Formula 1 weekend in Singapore.

Baird, who will team with Fabian Coulthard in the Supercheap Auto Bathurst 1000, finished second to fellow non-regular Carrera Cup Asia driver Christian Menzel in both races at the Singapore track, with Menzel leading from pole to chequered flag over the 12-lap opening race.

“I lost grip at the beginning of the race and at the mid-point of the race, my car started coming together better,” said Baird.

“I wasn’t overly happy to see the Safety Car because obviously my car was working right at that point.”

The 12-lap Race 2 was again interrupted by a brief Safety Car period, but the German Menzel held his nerve to lead from pole to chequered flag.

Fellow substitute driver Baird collected his second runner-up finish of the weekend, unable to catch Menzel despite his best efforts.

“Today we pushed as hard as we could,” said Baird after Race 2.

“I think yesterday Christian was a bit faster than me, but today we ran together. I want to thank SC Global for giving me the chance to come back. It’s a tough place to race; the humidity is unbearable in the car. Second place is not so bad, but of course this year is not as good as last year.”

Baird will now return to Australia for Round 5 of Porsche City Index Carrera Cup Australia at Bathurst.