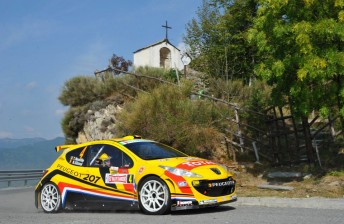 Thierry Neuville has won Rallye Sanremo following a thrilling finish to the Intercontinental Rally Challenge (IRC) round on the Italian Riviera.

Driving a Team Peugeot Belgium-Luxembourg 207 Super 2000, Neuville surged ahead on the demanding asphalt event with one stage remaining, having cancelled out an overnight deficit of 16.6 seconds.

By going fastest on the final test Neuville did just enough to beat Škoda UK Motorsport’s Andreas Mikkelsen for his second IRC victory of 2011 and ensure Peugeot’s capture of the IRC’s trio of classic events, Rallye Monte-Carlo, Tour de Corse and Rallye Sanremo.

Furthermore, it was the fourth time in 2011 that a round of the all-action IRC has been decided by a margin of less than two seconds following close finishes in Canary Islands, Czech Republic and Hungary.

Neuville’s success has also underlined the pace of Peugeot’s 207 Super 2000, which has led the way on the demanding narrow and twisty roads in the hills overlooking the Mediterranean Sea for a third year in succession.

Freddy Loix had started the second day of the rally leading by 2.7s having moved ahead of Mikkelsen after winning Friday’s night stage in his BFO-Škoda Rally Team Fabia. Mikkelsen, who had led from the opening stage on Friday, reclaimed top spot on Saturday’s first test when Loix made his characteristic slow start.

Mikkelsen remained in front until Loix retook the lead after going fastest two stages later. He started stage 11 a mere 2.5s in front only to crash on a fast downhill section approximately halfway through the test, fortunately without injury to neither he nor co-driver Frédéric Miclotte. With his car blocking the narrow road, organisers were forced to cancel the stage.

Neuville won the penultimate run, one of four stage wins during the final day, to start the final test 0.3s ahead of Mikkelsen. Despite a determined charge, the 22-year-old Norwegian was unable to land his maiden IRC victory, having led for much of the event.

Loix could have moved to the top of the IRC standings if he’d claimed maximum points and rival Jan Kopecký remained in fifth place, having been unable to replicate the pace that has carried him to back-to-back victories in Czech Republic and Hungary. As it is, by inheriting fourth, Kopecký’s comfortable lead remains intact heading to the penultimate round in Scotland next month.