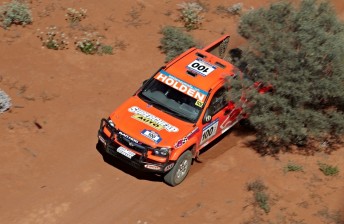 Craig Lowndes is flying the flag for the PWR Holden team, remaining ahead at the end of Leg 2 of the Australasian Safari in Western Australia.

The Holden Colorado is 14 minutes ahead of Steve Riley in a Mitsubishi Pajero of the Cairns Coconut Holiday Resort team after two stages totalling 326km from Mt Magnet to Sandstone.

“Today was good, the stages were much better than yesterday,” said Lowndes.

“There were a lot of fast sections, and it was a lot less slippery than yesterday, so a lot more enjoyable.”

The tall grasses that gave grief to competitors over the last two days cleared and the pace increased as Safari headed further inland.

The lead in the motos has been held by brothers Todd and Jake Smith on Honda, closely followed by Ben Grabham and Matt Fish, both on KTM. Dakar winner Frenchman Cyril Despres, also on KTM, said he had a better day and moved up one position to fifth.

“It was fun today,” said Despres. 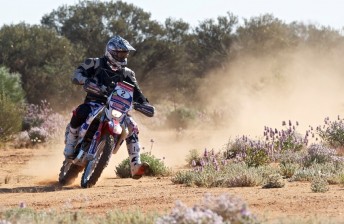 Todd Smith heads his brother Jacob in the moto division

“I was a bit faster, although I was expecting it to be like yesterday. There was some sliding – it was quite fun. Some parts were really fast.

“I’m still having difficulty with the course notes, it is very different to what I am used to and I’m not sure I can learn it in a week.

Todd and Jacob Smith have stayed neck and neck but are helping each other along the way.

“Jacob caught me and we raced each other most of the way, and we also worked together to open and close gates,” said Todd Smith.

“The stages were flowing nicely – it was fun.”

Colin Lawson remains fastest Quad despite having a tough day, wrecking a rear wheel rim and having to stop to change his drive belt.

Adrian Hermsen said he had his best day for a long time on the Can-Am Renegade. He sits second fastest in the Quads.