Lowndes heads the field at Safari

Lowndes heads the field at Safari 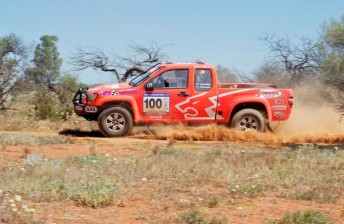 Craig Lowndes is out front at the Australasian Safari

Craig Lowndes heads the field at the end of the first full day of competition at the Australasian Safari in Western Australia.

Carpets of wildflowers in the WA proved treacherous for competitors, who despite heading the field by 6:45 had a collision with a tree in his Holden Colorado.

“We navigated our way into the forestry and had to then turn the car around in the first stage,” said Lowndes.

“It was really rocky and rutted and we did a lot of sliding in the wildflower areas.”

PWR team-mate Paul Weel also hit a tree. The damage was so extensive the team is considering withdrawing from the event.

“Really we’re too far behind and we’ve got too much damage,” said Paul Weel.

“You know, maybe it’d be better for us to concentrate on Craig’s car and make sure one wins. But we’ll reassess that before the start of Leg 2.”

Steve Riley in a Mitsubishi Pajero had major brake issues after heading the field at the end of the opening stage. Riley sits second ahead of Terry Conner  in a Nissan Patrol.

Tony Flood in a Mitsubishi Pajero did not start Leg 1 due to mechanical issues, while Tony Quinn was towed from the first stage.

Brothers Todd and Jacob Smith hold the two top spots in the moto division, followed by Rod Faggotter and Ben Grabham, who recovered after a tumble over the handlebars.

Dakar legend Cyril Despres is sitting a respectable sixth despite difficulties with the language of the road books.

“This is quite a different race for me and reading the navigation is like a different language,” said Despres. 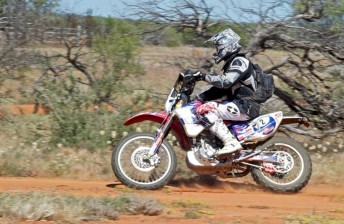 “I was not racing at 100 percent capacity today and it’s also the first day.”

Young English rider Sam Sunderland had another rough day in the Aussie outback, hitting a kangaroo and coming off his bike. He managed to get back on to reach the end of the stage but arrived disoriented and was seen by a medical team and given IV fluid.

It was a tough day for the Quads as well. The kinship of the riders was apparent when Heath Young towed Neville Yeatman from the first stage. Colin Lawson, finished fastest for the leg, this was despite losing a lot of time when he had to replace a drive belt in the first 70km. Paul Smith did not finish the second stage because of fuel problems.