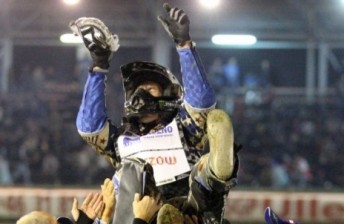 Greg Hancock has wrapped up his second World Speedway Title with a round to go in Croatia, whilst Andreas Jonsson has taken the Grand Prix victory.

The 41-year-old Californian has been supreme for much of season 2011 and overcame a knee injury to make the final in Croatia, eventually finishing fourth.

He becomes the oldest World Champion in Speedway history at 41 and 113 days, eclipsing the record held previously by Ivan Mauger – who was 39 and 339 days old when he won the 1979 World Championship.

Jonsson took a stunning victory – his third of the season. The Swede has leapfrogged Jaroslaw Hampel into second in the Championship, whilst Englishman, Chris Harris displayed a bounceback to form after a lacklustre season to finish second.

Third went to another Swede in Fredrik Lindgren.

It was a quiet night for the Aussies, with both Chris Holder and Jason Crump not making the semi-finals.

Crump finished the night on eight points and maintains fourth in the Championship.

Holder has drifted into the ‘bubble spot’ for automatic qualification into next year’s Championship with his seven points. Holder is, however 10 points clear of Lindgren in ninth and will need a consistent performance at the final Grand Prix in Poland to maintain his place in the Championship.