Lowndes in control as others faulter at Safari

Lowndes in control as others faulter at Safari 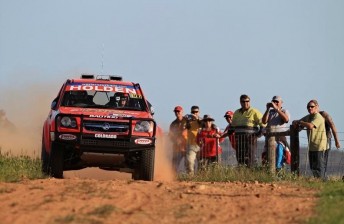 Midway through the second leg of the Australasian Safari and Craig Lowndes (PWR Holden Colorado) has stretched his advantage in the Auto division to nearly 10 and half minutes over Steve Riley in a Mitsubishi Pajero.

In the Moto division brothers Todd and Jacob Smith are separated by 89 seconds on their Honda CRF450Xs. Dakar legend Cyril Despres has moved to fifth over nine and half minutes off the lead.

Although only three days in, the Safari has lived up to its reputation as Australia’s toughest motorsport event, with several competitors dreams of winning already gone for the 4000km race from Geraldton to Kalgoorlie in Western Australia.

Auto division withdrawals are:
• Paul and Kees Weel’s Holden Colorado, which limped into camp after dark after hitting a tree and struggling through the tight, rocky and rutted course.
• Tony and Greg Flood in their ’91 Pajero, out due to mechanical issues faced in the Prologue.
• Tony Quinn and Toni Feaver whose Safari hoodoo continues. They blew engine during Leg 1.
• Darren Green and Wayne Smith who withdrew from the race after rolling their Nissan Patrol and blowing the engine.

Terry Conner and Jodi Conner had a rough ride yesterday having only two-wheel drive for half of the leg and Tangles said he was feeling pretty sore today. Rob Herridge and Tim Batten’s Subaru Forester suffered from some rear suspension problems but they are still in the race.

It was also a tough leg for the motos:
• Italian first-time Safari competitor Manuel Lucchesi had a tyre shred and catch fire on his Husaberg FE570 in the second stage yesterday. He is devastated not to be in amongst the top ten, but will continue in the event.
• Under medical team instruction, Dubai-based UK rider Sam Sunderland is not racing in Leg 2 following a collision with a kangaroo yesterday that forced him onto a fence and took him off his bike. He will be assessed by the Safari Medics at the end of the day to see whether he can race tomorrow.

Event Director Justin Hunt said it was really disappointing to see forced withdrawals from the event early in the race and he felt for the teams involved.

“These crews must be so disappointed after putting so much time and effort into getting here and we appreciate their commitment,” said Hunt.

All crews face another 129km stage this afternoon to complete the second leg.