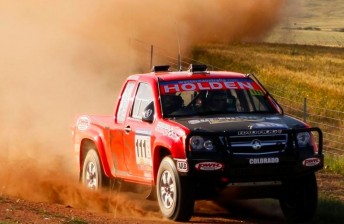 Despite rolling Paul Weel set the fastest time in the prologue

The stage has been set for an exciting seven days of racing following the Australasian Safari Prologue in Geraldton, Western Australia.

Long grasses from a wet winter provided challenges for both two wheels and four, making navigating and slipping amongst the biggest hurdles of the 19km course which sets the start order for Leg One of the race.

Despite rolling his Holden Colorado Paul Weel with father Kees in the navigator’s seat managed to still finish fastest, 26 seconds ahead of Tony Quinn and Toni Feaver in a ’94 Mitsubishi Pajero and Steve Riley and John Doble coming in third fastest in a 2008 Pajero.

Craig Lowndes and John Panozzo finished seventh in the field of 15 cars, but Lowndes said he was happy not to be starting out in number one position for the first leg of the race.

“I took a couple of wrong turns, the grass was almost head high so made navigation tricky, but I’m glad we’re not out first, and the race hasn’t really started yet,” said Lowndes.

The experienced Safari moto riders finished strongly, and fastest in the bikes was Jacob Smith on a Honda CRF450, just eight seconds ahead of last year’s winner Ben Grabham and just two seconds behind him again was Jake’s brother Todd Smith, also riding on the same model bike as his brother. 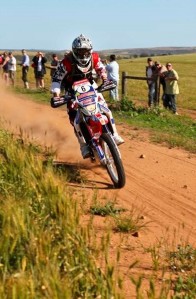 Jacob Smith was fastest in the moto divsion

Dakar champion Cyril Despres finished eighth in the Prologue and said he had a few frustrations, not finishing as fast as he would like.

“I caught the dust off other riders with only one minute between each rider starting,” said Despres.

“The navigation is a bit different to what I am used to so it will take me a couple of days to sort this out. But we have a lot of days ahead.”

Young English rider Sam Sunderland had a dramatic start to Safari when a small electrical component came loose and got caught in his steering and jammed, forcing him off his bike at high speed.

“I cartwheeled off the bike, it was so scary,” Sunderland said.

Paul Smith was ahead of the Quad pack at the end of the Prologue day finishing 54 seconds ahead of second fastest Heath Young and enjoying his first day of racing.

Today’s opening leg will see competitors race from Geraldton inland to Mt Magnet over 328 competitive kilometres. They can expect open station country before some rough, rocky and narrow tracks. The course continues along the Vermin Proof Fence where course crews enter a ‘Quite Zone’ and competition is restricted to 70 kph whilst travelling along the fenceline. The day will finish with the extremes of fast and flowing to rough and rocky tracks, with recent rains creating severe erosion.