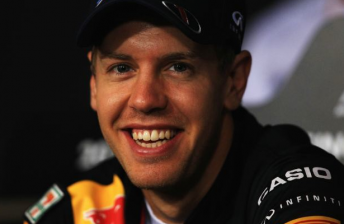 Reigning world champion Sebastian Vettel ended the first day of competition at the Singapore Grand Prix on top of the time sheets.

The Red Bull Racing driver clocked the fastest time of the two practice sessions at the Marina Bay street circuit, setting a 1m46.374s in the second session.

After a delayed and shortened first session that saw McLaren’s Lewis Hamilton edge out Vettel, the German responded in the second session, blitzing the field.

Last year’s Singapore winner Fernando Alonso, however, was close behind on 1m46.575s in the Ferrari, with Hamilton another half second shy on 1m 47.115s after damaging his McLaren’s floor when he ran over an exit kerb.

Button’s track time was hampered when his McLaren appeared to have a brake problem which prevented him from continuing. Kobayashi made a spectacular leap over the kerbs, while Toro Rosso’s Sebastien Buemi hit the wall in Turn 22, tearing off his right-front wheel.

The first session was delayed when the supporting Porsche Carrera Cup class dislodged the new temporary kerbs in some corners.

To cut track time even more, 10 minutes from the end, the red flag came out again after Massa had run wide, gone over a kerb before headed down an escape road. In the process, he inadvertently dislodged another kerbing bolt, forcing officials to call the session off.