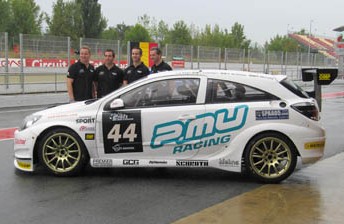 The Australian team with its Astra at Barcelona

Former V8 Supercars engineer Paul Forgie is helping call the shots for the all-Australian team competing in the Barcelona 24 Hour this weekend.

The entry is entered and engineered by car owner Ryan McLeod.

With the race into the first hour in wet conditions, the team currently sits in 24th overall from 67 entries. Nicholas is at the wheel of the car.

The team is competing in the competitive A3T class against 13 SEAT SuperCup cars. After one hour, the Australian entry is seventh in its class.

Walsh says that he is looking forward to the first of his stints.

“The car is fantastic to drive,” Walsh told Speedcafe.com.

“Scott has started the race well moving up the field strongly. He has reported that the car is very good in the wet so i am looking forward to jumping in a doing my first stint.

“I’ve never done an endurance race like this before so Im really looking forward to getting out there.”