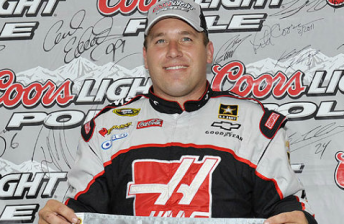 Ahead of the second race in the Chase for the Sprint Cup, a rain delay halted the qualifying session mid-way through each driver’s single lap runs.

Newman’s pole could be a very good omen for the Chase contender, as the #39 Stewart-Haas Racing Chevrolet won the July race at New Hampshire from the pole. It’s his third pole of the season and the 49th of his career.

Kahne’s Red Bull Racing team-mate, Brian Vickers, qualified before the rain delay, and his speed of 134.648 mph stood up for the third. Greg Biffle will start fourth ahead of Kurt Busch.

The session stalled with five cars left on the grid when Juan Montoya declined to take to the track for his qualifying lap in a light rain. Montoya sat on pit road, as did the four cars behind him, including the #48 Chevrolet of defending champion Jimmie Johnson.

Instead, NASCAR sent out jet dryers, and though a light mist continued to fall, the track dried enough to resume the session. Montoya posted a lap that was only good enough for 31st. The Columbian was not impressed …

Australian Marcos Ambrose will start the Sylvania 300 from 29th place.

Starting order for the Sylvania 300 at New Hampshire.