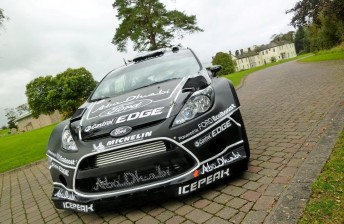 Following a concerted campaign by fans on the team’s Facebook page, Ford Abu Dhabi World Rally Team’s three cars will carry the livery which proved so popular during testing in France in June.

The design is the same as the Fiesta RS WRCs sported on the opening 10 rounds of the FIA World Rally Championship. However, the car’s base colour is black throughout, with white branding on top for Ford and its partners.

Ford received a massive vote of approval after the livery was unveiled during the mid year test. A Facebook group was set up to petition the team to use the new-look in a rally, and Ford of Europe motorsport chief Gerard Quinn opted for the Strasbourg-based asphalt round.

“We listened to what our fans wanted and discussed the idea with our partners at Abu Dhabi and Castrol,” said Quinn.

“They were in favour, and I believe this colour scheme allied with a close-to-the-ground asphalt set-up brings a sexy, mean and moody look to the Fiesta RS WRC. It was one of the potential liveries we discussed when finalising the design for our cars at the start of the year.”

Mikko Hirvonen and Jari-Matti Latvala journey to the Alsace region in north-east France boosted by a one-two finish in Australia earlier this month. Hirvonen’s third consecutive win Down Under boosted his challenge for the drivers’ championship and the 31-year-old Finn starts only the second asphalt round of the season just 15 points from the lead.

The Vosges features strongly in the route, with the opening two legs including special stages in the mountain range. The roads there vary considerably, blending narrow, bumpy sections through forests with fast, wide parts where speeds will near 200kph. In contrast, vineyard roads on flat open plains and two street test locations offer a completely different challenge.

“The stages are bumpy and abrasive in some sections, but the biggest surprise last year was how much we could cut the corners and the amount of mud and dirt that was dragged onto the roads,” said Hirvonen.

“They were very messy. I think the organisers are taking steps to prevent so much cutting, but we won’t know what difference that will make until the recce.

“When we check our pace notes in the recce we must be careful in deciding which corners we can cut and which we can’t. Where there is a drop-off from the edge of the road, we must think closely about whether it’s worth risking a puncture by cutting, or not. Winning in Australia removed some pressure, but we must carry that success forward and fight for the championship in the final rounds.”