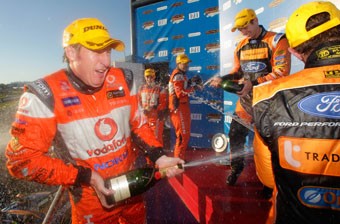 Mark Skaife celebrates on the podium

Mark Skaife is considering quitting his role on the newly-formed V8 Supercars commission to continue his racing career.

The six-times Bathurst 1000 winner, who won last weekend’s L&H 500 Phillip Island with Craig Lowndes, was recently appointed the chief of V8 Supercars’ commission – the body delegated the responsibility of guiding the sport into the future.

V8 Supercars implemented a rule that forbids commission members to compete in V8 Supercars competition. If Skaife elects to take his role on the commission, he will assume that job after Bathurst.

After winning the past three endurance races with Lowndes and TeamVodafone, Skaife told The Daily Telegraph journalist James Phelps that the commission role is an important one, but his desire to keep racing may keep him in the driver’s seat for as many as three to four years.

“From a business standpoint I am very keen to do that role,” Skaife told The Telegraph.

“But on the other hand, racing, at this point, is also very important. I am trying not to think too much about it now but it is something I will have to talk to people about after Bathurst.

“Right now it is just a dream come true to win three races from three with Triple Eight and, coming into Bathurst, things couldn’t be better.”

Skaife said that his first preference would be to continue driving and head the commission, although rival teams are likely to block the move.

“Yes, that is right. That would be the first step (to ask for permission),” he said.

“The commission role is something that is very important for the sport and I obviously have to be careful and mindful of some of the concerns the other teams may have if I continue driving for another team.

“But, again, it is just one of those things and the timing of it, and the result I had on the weekend makes me think that I need to do the best thing for me over the next three or four years.”

CLICK HERE for more on The Daily Telegraph with Skaife.

What do you think Mark Skaife should do? Vote now in Speedcafe.com’s Pirtek Poll …