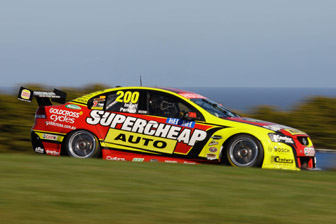 Russell Ingall and Jack Perkins will compete with the #200 at Bathurst (Image digitally altered).

Russell Ingall and Jack Perkins will compete with the #200 at the Supercheap Auto Bathurst 1000 in two weeks time.

To honour Ingall’s 200th Australian Touring Car/V8 Supercars round/event start, the Supercheap Auto-backed team has applied to V8 Supercars for a number change dispensation, which has been approved.

The number change is a one-off, replacing Ingall’s regular #39 that he has raced under since he joined Paul Morris Motorsport in 2008.

The #39 represents the year that team owner Terry Morris was born.

While the number on the window will be different attahurst, there will be something very familiar about the names on the windows.

For the first time since 2001, Ingall and Perkins will race together at Mount Panorama, although this time, it will be Jack Perkins – not Larry Perkins.

Ingall is the oldest driver in the V8 Supercars field – but one of the most successful. Besides his two Bathurst 1000 wins, he also won the 2005 V8 title with Stone Brothers Racing.