Horse racing was the sport that Wanless followed and was involved in; he won many races as a young adult and is still winning on horses today, thanks to a Polo career that has so far spanned 22 years.

It wasn’t until Wanless was 19 that he was introduced to multi-horsepower and cars. He competed in Drag Racing and then an early Stock Car sponsorship would eventually lead him to two Australian Stock Car championships and a coveted Californian title.

“I started a wrecking yard business when I was 19 and I used to sponsor a guy with a Stock Car,” Ron Wanless told Speedcafe.com

“He used to come in every week after an event with a smashed car, we spent half the week pulling parts off and replacing them, then he’d go racing again.

“My family was always involved in horses and I’d never been to Speedway, they talked me in to coming to an event.

“I soon worked out that this bloke wasn’t much of a driver.

“I opened my big mouth and said I could drive better than that, so I started, I got an old Reilly car and did quite well. I loved it.”

Wanless loved horses and did very well in the saddle before transferring to the cockpit.

“My background was horses,” said Wanless.

“I still hold the high jump record at the Exhibition Ground (Brisbane) which was where the Royal Show was held. I won the high jump on a horse called ‘Emperor’ and the water jump on ‘Anythink’.

“Before Speedway I was drag racing. I was the first guy to go over 200miles an hour at the Surfers Paradise strip – that was in 1970.

“That wasn’t much of a thrill. You’d get two runs on Saturday to make sure the car was right, then three runs on Sunday. I’d waste a 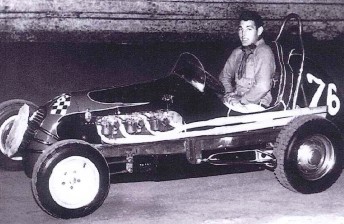 whole weekend for half a minute; I couldn’t see much point in it.”

When Wanless was racing Speedway, the sport was big. They’d regularly get 20,000 people coming to the events and when overseas drivers came crowd numbers would soar.

“Speedway was big in those days,” said Wanless.

“It was before SKY TV and the other entertainment channels and when the Americans came out you’d get 35,000 people.

“The first champion driver I saw was Jimmie Davis, he’d come third at Indianapolis and was my hero back then.

“Then there was AJ Foyt who I raced at Brisbane. He was the only driver to come from behind at the Exhibition ground and beat me.

“He was a freak; he could drive anything and win in it.”

Wanless became friends with Foyt and had many interesting conversations with the talented driver.

“I was driving to the Gold Coast with Foyt, and Jim Gilmore, and I asked him who his toughest opposition was,” said Wanless.

“Mario Andretti had just won the F1 title and he’d raced against Al Unser, so I was expecting him to mention one of those guys.

“He didn’t answer me, I thought he didn’t hear me, so I asked him the same question again and Jim Gilmore said, “There’s something you need to know about AJ, he doesn’t think any of those guys can drive”.

“This was a guy that was surrounded by champions and he didn’t rate them, he not only was good, but thought he was good.” Wanless was becoming one of the best drivers of his generation; he was winning lots of feature races, many state titles and then won back-to-back Australian Speedway championships.

“I won a lot of feature races, I won my first Australian title in Brisbane in 1978 and then won it again the next year at Claremont in 1979,” said Wanless.

“It was a good, there were a couple of other times I should have won, but I won my two titles pretty convincingly. I was pretty happy; those years were good in speedway.

“I then took up road racing. I should have taken that up earlier than I did, but I was a drawcard in Speedway and someone said ‘you are mad if you go road racing, here you are king of the shits out there you will be shit of the kings’.

“I took the advice and didn’t go road racing for a couple of years, but by the time I did go it was so much different.

“I did okay; I got fifth at Bathurst one year and seventh another year. I never won a race but I got a lot of placings, I had a lot of fun.”

Wanless’ best chance of a Bathurst win came in 1982 when he drove alongside Garry Rogers in his own team.

“Allan Browne owned Recar and we owned the team, we were privateers,” said Wanless.

“We had Allan Grice and Garry Rogers. The two cars were equal and we tossed the coin to see who drove what, Allan teamed with Grice and I was with Garry. 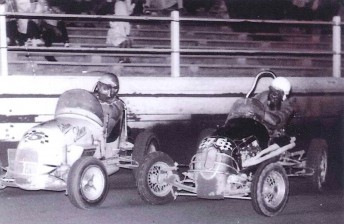 Wanless in action on the track

“Grice was the best driver followed by Rogers. Brownie and I were equal.

“Grice was the first guy to go around Bathurst at 100miles an hour and it was in one of our cars, which was big.

“He qualified pole and I think we were fifth, they were exciting times. It was also the year I met Kerry Packer.”

1981 was memorable for an incident between Wanless and Kevin Bartlett – who had backing from Packer’s Channel 9. Bartlett famously said that he would clobber the guy that ran him off the track, not knowing it was the well built and imposing Wanless. Nothing eventuated but it made for good television.

“Kevin had tried to overtake me at the top of the mountain,” said Wanless.

“This was before they had all the safety things and I ran him off the road.

“He only had to wait a few more laps and he could have passed me down the straight. He had no chance up, down or over the top, but had me on the straight.

“He came into the pits and abused the team. When my team manger decided that it was time to change drivers, I came in and Kevin and I had a few words.

“It was short-lived and we are now good mates.”

Following the event Packer invited Bartlett and Wanless to his race track at Scone. The two didn’t realise that the other was there and everything was settled on the racetrack. All Wanless would say is that there “was not a lot in it as I had a weight advantage”.

After racing touring cars for four years, Wanless decided to give it away in 1984 due to his growing business interests. He had a scrap metal business and was selling into Asia. He realised that he couldn’t commit to racing and do the job to the best of his abilities.

“To be a successful driver you have to be a driver,” said Wanless.

“I couldn’t be a business man that also raced 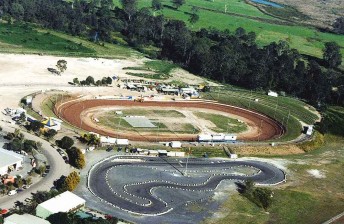 Archerfield Speedway in Brisbane, Wanless built this in 1977 and still owns it.

“I couldn’t compete with Brock, Johnson and Grice; you had to be fair to yourself.”

Wanless’ career highlights are impressive, the two national Speedway titles in 1978 and 1979, the Californian State title in 1969, he was the first to go over 200 miles an hour at Surfers Paradise and won more Speedway feature races at the now defunct Exhibition track (in Brisbane) than anyone else, but what some don’t realise is that he also built and still runs Archerfield Raceway.

“It all started in 1968 when I rented some land from a farmer. We ran it mainly for stock car racing, but then the farmer sold the land and cut it up for industrial use.

“I then bought 13 acres and built the Speedway. It’s still going well today.”

While Wanless doesn’t race any more, his two sons Dean and Todd have followed in their dad’s footsteps. Dean drove NASCAR in Australia and the US, while Todd won a national Sprintcar title and still races.

As for Ron Wanless, he still keeps a watchful eye over his business – Wanless Enviro Services. Son Todd runs the waste management part of the business, while Todd manages the truck and wrecking yards and the scrap metal divisions. 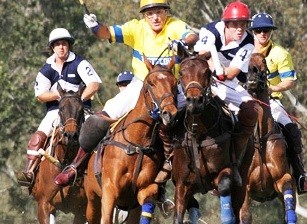 Wanless (centre in yellow) in action on the Polo field

Aside from this, Horse Polo has been a passion for Wanless for the last 22 years. He has his own polo fields, plays up to four times a week and owns over 40 polo horses.

“I’m down to one horse power now,” said Wanless.

“I play polo all over the world, in-fact I’m about to head to Argentina to watch the world polo titles.

“I’ve won the highest rated polo event in Australia three out of the last four years.

“It’s called the Ellerston 16 goal tournament, which is played at Kerry Packer’s place at Scone; it’s recognised as the Australian titles in polo.”