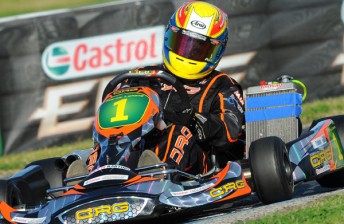 Pierce Lehane believes that he’s got what it takes to secure back-to-back Pro Junior (KF3) titles in the CIK Stars of Karting Series presented by Castrol EDGE.

Entering next month’s (October 15/16) Grand Final, Lehane holds a 27-point buffer over his arch rival Joseph Mawson with Jake Kalrich a mere one point further back in the standings.

“I think I had a little bit more of gap in the points than I did entering the final round last year, so while it’s not going to be easy I’m confident of being able to hold on,” said Lehane.

“Newcastle is my home track, we missed the set-up last round but I’m confident that I’ll be back this round and the racing between us all at the front should be very good.”

If the CRG driver is successful in his quest to win back-to-back crowns, he will become the first driver since fellow Sydneysider Kristian Lindbom won two straight in 2003/2004. He will also be only the third driver in series history to complete the feat – the other driver to secure the title twice is current Indycar star Ryan Briscoe (1995/1996).

“If I can go back to back and have my name listed twice on the Jon Targett trophy it would be the greatest achievement of my career and a great honour,” said Lehane.

Mawson, who is yet to break through for a victory during his maiden year in the elite series, will be aspiring to spoil Lehane’s fairytale finish.

“I had a pretty good round last time at Newcastle and I’m confident that it can go even better in the final round. With a bit of luck on my side I think that I can take the title,” said the Fujitsu Cool driver.

“It would be awesome to have my name alongside the likes of Tim Slade, Michael Caruso and Ryan Briscoe as a champion of the category. They’re all drivers I’ve looked up to.”

With two round wins already under his belt in 2011, including one in round four held at the Newcastle circuit, Klarich can’t be discounted either.

“We came away with the victory last round but this round will definitely be tougher as everyone will be on top of their game with so much on the line,” said Klarich.

“I’ll be going out the to do my best in every race and let the points take care of themself.”

With a total of 85 points up for grabs throughout the weekend, the title will go down to the wire with fourth placed Brock Plumb and fifth placed Jake Coleman also still in contention mathematically, but they would have to have a lot of things fall their way if they are going to snare the title.

Along with the championship title, the series victor will also receive $10,000 funding to compete in an CIK-FIA approved event with the runner-up receiving their race tyres for use in the 2012 series paid for and third place free entry to the 2012 series, all courtesy of the Australian Karting Association.

The fifth, and final, round of the CIK Stars of Karting Series presented by Castrol EDGE will be hosted by the North Shore Kart Club at the Mt Sugarloaf Raceway in Newcastle on October 15/16.

An hour-long television package, focusing on the championship decider, will be broadcast on SPEED (Foxtel 505) later this year.