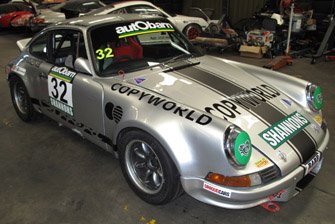 The Porsche that Amanda Sparks will drive at Bathurst

Touring Car Masters Class A contender Amanda Sparks will take on the next round at Mount Panorama in a new car.

The lone female in the historic racing series will drive the ex-Terry Lawlor Porsche after Lawlor staepped away from the series for business reasons. Fellow competitor Ross Almond bought Lawlor’s 1973 Porsche 911 RS and will allow Sparks to compete in it.

The ex-Lawlor Porsche has already completed five races this season, coming home first in class and top 10 outright on four of those occasions.

The car now heads to The Mountain with a new #32 and a new livery.

“It’s very exciting to be able to have the opportunity to race again at Bathurst,” Sparks said.

“It’s such a fierce weekend with tough competition within the ranks, so I know it’s going to be a challenge that will push me to the next level.

“I’m very lucky that the 911 has been offered to me and I’m extremely grateful for the ongoing opportunity, especially given how good the racing has been this year right across the category.

“Believe it or not, the new car has quite a few differences to #33 Porsche I’ve been racing, however, that just adds to the challenges and excitement of the event.

“I’m very happy that our new livery will stand out but also keeps with the similar look of all the 911’s in the team, and think this new colour scheme will look great on track.”

In other new entrants for Bathurst, Mark Buik joins the series for the first time this year, driving the Toshiba/Copyworld #26 Porsche.