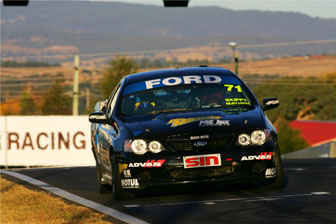 Marcus Zukanovic at Bathurst in 2006

Marcus Zukanovic will take the reins of the Auto One Wildcard entry for Round 5 of the V8 Ute Racing Series at Mount Panorama in two weeks time.

Zukanovic, the 2006 V8 Ute Series champion, currently competes in the Fujitsu V8 Series and will pull double duties at Bathurst, driving his Fujitsu Series Commodore and the Auto One-sponsored Wildcard entry.
“I’m definitely looking forward to driving Utes again. It’s a tough competition, they are a great bunch of guys and I can’t wait to have another go,” Zukanovic said.

“I’m looking forward to being the first driver to put the car on podium for Auto One.”

The Auto One car will again be prepared by Williams Race Tech and Zukanovic will juggle the duties with his full-time Fujitsu drive.

“I’ll also be driving my Fujitsu car so it will be a busy weekend but I’ll manage,” he said.

Zukanovic’s first V8 Ute appearance was in 2003 when he teamed up with Jack Elsegood in a two driver legends event at Mount Panorama. He raced against Peter Brock, finishing eighth behind the Bathurst legend who won the race with his son James. From that point, Zukanovic was hooked on the series.
“I raced with Jack in 2003 for a one off event and fell in love with the Utes. I ended up buying Denis Gilbert’s Ford for the 2004, 05, and 2006 series.”

In 2005, he narrowly missed the title by only two points to two-time V8 Ute Champion Damien White but returned in 2006, taking out the series title in his well known Ford ‘Black Betty.”’

The same year he also claimed the Commodore Cup title and was named CAMS Personality of the Year, which he shares with the likes of Grant Denyer, Simon Evans, Marcos Ambrose and Craig Lowndes.