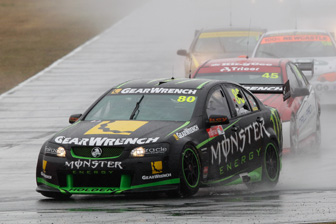 Triple Eight Race Engineering will almost certainly enter a car in next year’s Fujitsu V8 Series – but don’t look for Andrew Thompson to be the driver.

The multiple championship and Bathurst 1000 winning team gave Andrew Thompson a career lifeline this year, offering him a drive in the Fujitsu V8 Series in the Monster Energy Commodore, plus a seat alongside Jamie Whincup in the V8 endurance races.

After a forgettable 2010 season with Walkinshaw Racing, Thompson has turned his career around, comfortably leading the Fujitsu V8 Series, plus scoring second place with Whincup at last weekend’s Phillip Island 500.

Team owner Roland Dane confirmed that he plans to enter a car in the development series, but says that it would be against the spirit of the Fujitsu Series to enter Thompson again.

“I have every intention to run in the Fujitsu Series next year,” Dane told Speedcafe.com.

“But I think it’s highly unlikely that we’d run ‘Thommo’ in the Fujitsu Series.

“There’s a very specific reasons for doing it this year – rebuild his confidence, get him back up to the level of driver which he is and deserves to be and build a platform from which to do that.”

Dane says that the Fujitsu V8 Series – now in its 12th season – offers his team much more than just a playground for Thompson to race.

“The Fujitsu program, at various levels, has performed as a development series for the entire team,” Dane said.

“I’ve got people involved in that who are up and coming members of our team. I’ve used it to satisfy the competitive urges of a couple of people in the team who don’t want to commit to running a full schedule of main event races, and also of course, with Thommo, giving him a platform from which to rebuild his confidence and believe in himself.”

At this point, Thompson does not have a V8 Supercars drive for 2012. While there are a number of available seats still remaining, Dane says that Thompson will be a contender to retain his seat – if a full-time drive does not materialise.

“If he gets a full-time seat, I’d be the first one to say “good luck, take it,” like Steve Owen last year,” Dane said.

“If he’s available next year, he’ll be on my list.”