Taylor gets tarmac tuition ahead of France

Taylor gets tarmac tuition ahead of France 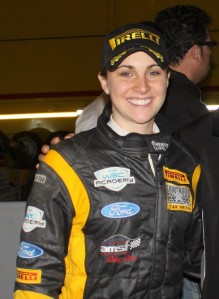 Australian rally driver Molly Taylor is ready for a start in Round 5 of the World Rally Championship Academy Cup series, after tackling an intensive tarmac training course in Italy.

Rallye de France Alsace (September 29-October 2) is the second of the six-round junior development series events to be run on tarmac and as preparation Taylor spent two days honing her skills at the Vittorio Caneva Rally School. Caneva is well-known in European rallying circles, having fine-tuned the likes of MINI WRC driver Kris Meeke and Guy Wilks of the Intercontinental Rally Challenge (IRC).

“I was given the chance to do this and I couldn’t knock it back,” the 23-year-old Sydneysider says.

“It’s a great opportunity to polish my tarmac skills and learn some new ones before the start of this next event. Vittorio has worked wonders for a lot of drivers, so I’m confident of being able to reap the benefit of his expertise.”

This is the second year in a row that France’s World Rally Championship qualifier will take place in the country’s Alsace region to the east following its move away from Corsica, the event’s home from 1973 until 2008.

Alsace is Sebastien Loeb country and the Citroen ace secured his seventh world crown last year on a special stage run through the streets of his hometown of Haguenau. This year’s event will also close with a power stage in Haguenau but the Academy competitors will not be involved. They only contest two of the three days of the event, with the final day spent analysing their performances.

After France, there is just one more round of the series (Rally GB, November 11-13) and Molly is already considering what she will do in 2012.

One option is to contest the Academy Cup series again next year, to expand on what she has learned so far, but she will need to replace the scholarship funding she received this year for the World Rally Championship support category.

“I’ve had a brilliant opportunity with Pirelli and the FIA this year but it’s a one-year programme,” said Taylor.

“After the final Academy round takes place at Wales Rally GB in November, I’ll be back to square one so I’ll need to find those dollars to carry on.

“I really would like to do it again. In terms of what I’m hoping to achieve in the longer term, it would definitely be the smartest move. I’ve learned a lot this year, so I’m optimistic that I could mount a proper attack next year in terms of results and championship positions – but it is just one of the options I am looking at, and as with any category of motorsport, it’s all about finding the money, so that will definitely be one of my priorities over the next few months.”

The WRC Academy is a one-make, development series aimed at bringing the best young rally talent in the world to elite levels. They are tackling six rounds of the WRC, with France being round five.

All the Academy competitors drive identical Ford Fiesta R2s prepared by Ford’s WRC specialists, M-Sport, with tyres provided by Pirelli. Taylor along with fellow Australian Brendan Reeves are two of only six drivers on a fully funded scholarship for the year, covering all her WRC expenses.