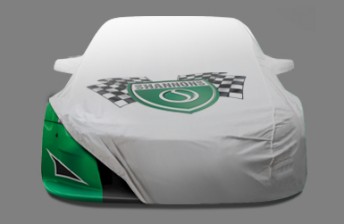 Kelly Racing has revealed a sneak peek of the car that it will enter in the Bathurst 1000 for Grant Denyer and its reality TV program winner.

With just two episodes of the Shannons Supercar Showdown remaining before the winner of the is selected, the team has released pictures of the covered Shannons Mars Racing car, exposing the right front corner.

This Sunday’s episode (7mate, 5pm) will be the first time the livery for the #77 Shannons Mars Racing Commodore will be seen.

The Commodore VE will be driven in the Supercheap Auto Bathurst 1000 by Seven Network’s TV personality and race driver Denyer. He will be partnered by one of the three remaining contestants – British driver Andrew Jordan, Formula Ford star Cameron Waters or female stand-out Samantha Reid.

In this Sunday’s episode on 7mate, the final three contestants on will be put to the test behind the wheel of a Kelly Racing V8 Supercar at Winton Motor Raceway where they will each be assessed by judges Todd and Rick Kelly as well as the team’s race engineers. 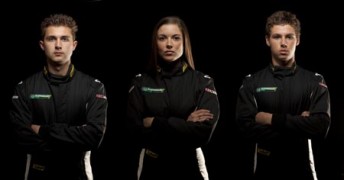 One driver will be eliminated this Sunday, leaving just two drivers vying for victory in the final episode on Sunday, October 2 – one week before The Great Race at Mount Panorama.

Kelly said that the Shannons Mars Racing livery was different to the team’s existing liveries.

“This Sunday’s episode is the first time that fans will get to see our Shannons Mars Racing Commodore and we’re really pleased with how it looks,” said Kelly.

“We have the black and white Jack Daniel’s Commodores, our Stratco ‘red rocket’ and of course the ever-changing colours of the Pepsi Max Crew – and the Shannons Mars Commodore is completely different again.”

It will be a Shannons Supercar Showdown marathon on 7mate this Sunday, with Episode 1 screening at 12:30pm followed by each episode all the way up to 5pm when the latest episode (Episode 10 – the second-last episode of the series) airs in the usual time slot.