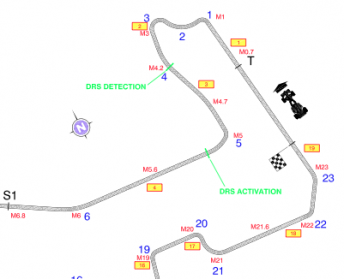 The FIA has announced that the Formula One cars will use just one DRS zone at this weekend’s Singapore Grand Prix.

The DRS detection zone will be placed at Turn 4, with the activation zone right after Turn 5 and ahead of the longest straight of the Marina Bay circuit.

The implementation of the Drag Reduction System has been a huge success this year, and governing body is hoping that the DRS zone at Singapore will help improve what has traditionally been a circuit that is hard to pass on.

The single DRS zone reverts away from the two zones that was seen at the Italian Grand Prix.

This weekend’s Singapore Grand Prix is the third time the under-lights event has been run. It is regarded as one of the best Formula One races of the year.

For more on the Singapore Grand Prix, check out Speedcafe.com’s exclusive and extensive F1 Race Guide, taking you on a behind-the-sceens look at this weekend’s race.