Dakar legend relaxes ahead of Safari

Dakar legend relaxes ahead of Safari 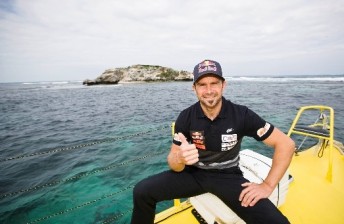 The Frenchman, who in ten years of touring and visiting 40 countries rated his visit to Rottnest Island off Perth as one of his top three experiences outside of racing.

Despres took to the ocean and also completed his pre-event training with a bicycle ride.

“I couldn’t believe the experience and an island like this could exist. Cycling is part of my training for competition, so I felt a real connection here since the bicycle is the main mode of transport around the island.”

Despres takes to the Australian Outback from tonight to compete in the toughest endurance motorsport event in the Asia Pacific Region. The 2011 Australasian Safari will be the Dakar champion’s first Australian event, as he takes on some of the world’s harshest desert landscapes in the West Australian Outback.

The route for 2011 Australasian begins at Hillarys Boat Harbour tonight for a Ceremonial Start with overnight stops in Geraldton for the Prologue (Friday), then Mount Magnet (Saturday), Sandstone (Sunday), two nights in Laverton (Monday & Tuesday), two nights in Leonora (Wednesday & Thursday) before finishing in Kalgoorlie on Friday 30th September.