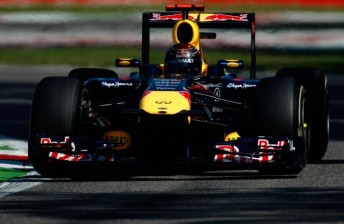 Sebastian Vettel took yet another win in Monza

Speedcafe.com’s guide to the 2011 Singapore Grand Prix is now available.

In this edition of the Formula One Race Guide, we reveal all you need to know about Sebastian Vettel’s chances of wrapping up the 2011 World Drivers’ Championship at the Marina Bay street circuit this weekend.

Having won last year’s title in a tense, come-from-behind decider in Abu Dhabi, the Red Bull Racing driver could well seal the 2011 title with a staggering five races still remaining.

The Singapore Race Guide also features the Bagman’s regular team-by-team analysis, in addition to all the stats and facts heading into this weekend’s race.