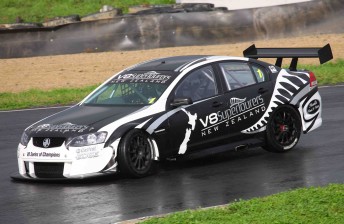 The aerodynamic package on New Zealand’s V8SuperTourer is set to dramatically change.

The new all-Kiwi series has used a Holden V8 Supercar front bar and rear wing on its prototype machine, but as the front and rear wings are intellectual property of V8 Supercars, the V8SuperTourers have been forced to design its own wings.

The new aero on the front of the Kiwi V8s will be radically different, displaying more aggressive wings, ensuring the two classes can be easily distingished.

The V8SuperTourers class is set to kick off in February next year.

Category administrator and driver John McIntyre says that to get the project underway, they needed to use a V8SA wing as a benchmark.

“To get the whole project going, we needed to use something that was already out there and available,” McIntyre told Speedcafe.com.

“Holden Motorsport in Australia helped us out with by giving us use of an aero package, but we knew we weren’t going to run that. We obviously needed to test the car and get it going so we worked out what we needed downforce wise.”

McIntyre says that the new aero package will raise eyebrows.

“The new aero will have its own Kiwi stamp on it and it’s going to end up being quite different to what the Aussies have on the V8 Supercars,” he said.

“They are some quite big changes.

“From the bumper line up, it will virtually be the same as what V8 Supercars have, but below that, you’re going to see a much more agressive stance.

“There’s the potential there for more aero, and it will be something that fans will instantly pick up on. They will see it quite clearly that it is different. I can’t wait to get it out there.”

McIntyre says that he is pleased with the steps that are being taken.

“We are moving along nicely now,” McIntyre said.

“We have people trying to buy the final two entries, so we’ve got more demand than we have positions. We’re working extremely hard on two extra manufacturers. There’s a lot there in the background that is coming together for us.”