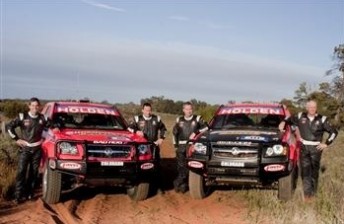 Craig Lowndes will tomorrow begin the defence of his Australasian Safari title when the event gets underway with the ceremonial start at the Hillarys Boat Harbour north of Perth.

The PRW Holden Colorado team of Craig Lowndes and John Panozzo, will be joined by a second entry for Paul Weel and Kees Weel.

The team completed pre-event testing at past Safari winner John Hederics’ property in Mildura, with the focus on making the shakedown of the vehicles in true Safari conditions.

“First was a 40km gravel road section for a systems check, and then a 10km competitive course that was set by John (Hederics).

“With the sun in our eyes it felt as if we were doing the Safari – Lowndes and Panozzo leading the way and Paul and I getting covered in dust. Then we did the same in reverse.

“We did some tyre changing practice and the weather felt as hot as Safari conditions in the WA goldfields. I think Craig and Johnnie (Panozzo) did the best time, so let’s hope we don’t get any flats!

The PWR crew will be amongst 90 competitors in four-wheel-drives, bikes and quads which will tackle the prologue stage Geraldton on the Western Australian coast on Friday.

It’s then inland through the northern goldfields to Kalgoorlie seven days later at the end of the 4,000km journey.

See below for a preview video from Holden Motorsport.