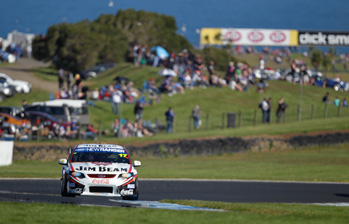 Steve Johnson says that Dick Johnson Racing will be stronger after its Phillip Island shocker.

With the #18 (James Moffat/Matt Halliday) and #17 (Johnson/Besnard) finishing 25th and 26th in the L&H 500, Johnson says a throughout post-Island debrief has uncovered the issues that slowed them.

“My engineer hasn’t been able to sleep over the past few days. We’ve got a very good program leading into Bathurst and we’ve pin-pointed the exact problems we had down there and we’re going to make sure that we never have those problems again.

“The good thing is that the team is actually positive about the weekend just gone and the problems we’ve found. I don’t want to go into the specifics, but we’re quite excited.

“Even though it was a hard weekend, we’ve highlighted some major problems that we didn’t expect. We’ll be stronger for it.”

Johnson will be a guest host on ONE HD’s motorsport program RPM tonight.

CLICK HERE for more with Johnson in today’s edition of Cafe Chat.