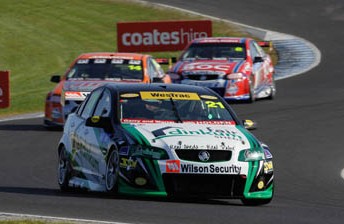 Brad Jones Racing will remain a three-car team in 2012 after Jason Bright confirmed that his Racing Entitlements Contract will continue at the Albury team.

Bright owns the majority stake in the Racing Entitlements Contract that Karl Reindler competes under, with the car prepared by BJR alongside Bright’s Team BOC and Jason Bargwanna’s Jana Living cars.

Brad Jones is the other part owner of Bright’s single REC.

Bright says that having his REC at BJR – the team he drives for – is the best outcome.

“It’s a partnership between BJR and myself and it’s working really well,” Bright told Speedcafe.com.

“It’s silly to move it anywhere, other than where I am.

“And best of all, it works well running three cars in the one team. “It works well because I’m close to it and I can still have influence on it. I certainly wouldn’t want to be leasing it out anywhere.”

Since Bright first moved to the team in 2010, Reindler has represented Bright’s REC. The West Australian driver has stepped up his performances this year, recording a number of top 10 qualifying and race results.

At this point, Reindler has not confirmed his place in the team for 2012, but Bright would like to see him return for a third season.

“I’d like to see Karl stay in the seat, as long as all of our deals make sense,” Bright said.

“For him to just do two years would be pretty tough. Most of the guys you see really start to pick it up in their third or fourth year.

“It’s hard in this game to get up to speed when you’ve got such limited testing. There’s been a couple of rounds where he has shown very good speed. I’ve always thought that his potential is much higher than what we’ve seen.

“I’d say that he has probably surprised me and a lot of people in the rounds where he was running extremely competitive. It’s a matter now of levelling it out and making sure that he is not at the back.

“His qualifying position is usually representative of where my car is. When it’s a struggle, he’s down the back, but when the car is working well, he’s somewhere in the top 10.”

Reindler, 26th in the V8 Supercars Championship, teams with David Wall for Phillip Island and Bathurst.

Due to mechanical issues, the pair finished in last place at Phillip Island last weekend.

In other BJR news, Kim Jones drove one of his team’s V8 Supercars yesterday at Calder Park. CLICK HERE for Speedcafe.com’s inside story.