Alex Fevola gets V8 ride of a lifetime

Alex Fevola gets V8 ride of a lifetime 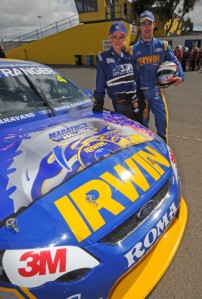 Fevola is the Victorian ambassador for Ocsober, a community campaign asking us to cut out alcohol for the month of October so money can be raised for Life Education.

“Ocsober is a fundraising campaign that raises funds for the Life Education program,” said Fevola.

“It prepares primary school aged children for the teenage years and educates them on healthy choices when it comes to alcohol, drugs, nutrition and fitness.”

Fevola raised some Ocsober awareness by going for a hotlap with V8 star Alex Davison. Nervous before the ride, Fevola described the experience as “the scariest thing she’s ever done, it was terrifying.”

Davison was amused at Fevola’s reaction in the car.

“She coped well, she was flopping around like a rag doll for a little while,” laughed Davison.

“I don’t know if she was screaming or not, but we both got to the other end, so it was all good.”