The 42-year-old Melbourne based driver has picked up naming rights support from online betting agency Favourit.com.

“It’s great to have Favourit on board – the orange colours should really stand out on the track,” Bates told Speedcafe.com at Calder Park.

“Favourit will be with us for the rest of this season, as well as next year, regardless of whether we continue in the Fujitsu Series or move to the Carrera Cup. 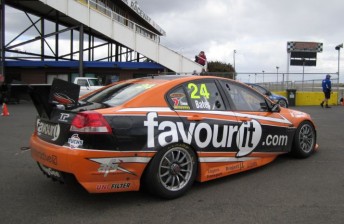 “It’s been good fun to give some of the Favourit guys some laps in the car today to show them what it’s all about, and I can’t wait to head up to Bathurst next month for the next event.”