International GT racer Allan Simonsen says he’s not ruling out a full-time switch to the V8 Supercars Championship next season.

The 33-year-old Dane, who raced in last weekend’s L&H 500 at Phillip Island alongside Greg Murphy in the Pepsi Max Crew Commodore, will reach the end of his three year contract with tyre company Hankook at the conclusion of this season.

Simonsen is currently competing as a factory Hankook driver with Team Farnbacher, which contests the GTE class of the Le Mans Series, in addition to such events as the Le Mans 24 Hours, the Nurburgring 24 Hours and VLN series races.

While managing a second place finish in the Le Mans 24 Hours last year, the Farnbacher operation has often struggled as the lone Hankook runner in a sea of Michelin and Dunlop factory entries.

“Hankook is very interested in continuing,” Simonsen told Speedcafe.com of his options for 2012.

“So these things are being discussed now, and after that I’ll make a decision as to what the future brings. 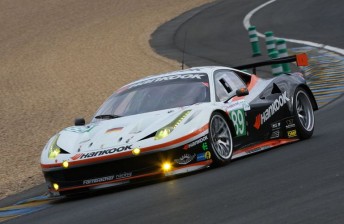 “It’s always the silly season at this time of year, so I’ve got to see what’s around and do what’s the best for my future.”

Despite also being able to mix a British GT Championship program with his Hankook commitments, Simonsen makes no secret of the fact that he is willing to trade it all for the right V8 Supercars opportunity.

“If there is a good offer from Australia then I’d be more than happy to come and race here on a full-time basis,” said Simonsen.

“I’ve never ruled that out as being my first priority, but as it is now all my jobs keep coming from Europe.

“I’m sure there will be a lot of things on the schedule (next year), but we’ll just have to wait and see.

“If I’m going to take on a major project like the V8 Supercars or World Endurance Championship then there might not be time for much else.”

Finishing 13th with Kelly Racing in the weekend’s L&H 500, Simonsen could be on the Braeside-based team’s shopping list for next season, pending the future of current driver David Reynolds.

While Kelly Racing has stated that it has a two-year deal with Reynolds, an opportunity may present itself for Simonsen if speculation that the Victorian will move to Rod Nash’s The Bottle-O Racing outfit comes to fruition.