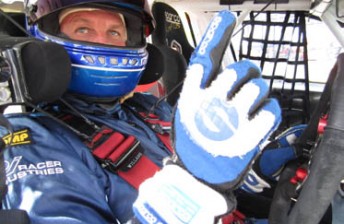 V8 Supercars team owner Kim Jones has taken one of his race cars for a spin around Calder Park Raceway today.

The last time that Jones drove a V8 Supercar was at Oran Park in one of his team’s old Ford Falcons in 2006.

Jones owns and competes in a historic Formula Atlantic and said that his brief experience today was a lot different to his open-wheeler.

“Compared to my regular race car, it feels like a taxi!” Jones told Speedcafe.com at Calder Park Raceway today.

“And it has got all these flashing lights and other s### that I don’t understand! I figured out that the purple light was for brake lock, cause there was a whole lot of smoke came into the cabin.”

Jones could hardly contain his joy at driving the Commodore, but did pick out some of the car’s faults.

“They are really nice, but they still wallow around,” Jones said.

“I understand why they are so hard for people from other categories to come and drive them fast. It walks around so much on the tyres.

“Kept in mind, I’m not going fast, but when it chatters, understeers and the weight transfers to the rear, you can feel it walking over on the bags. It still takes a little bit to get used to what it is.

“But it’s a much, much better car than the Falcon I drove at Oran Park five years ago.”