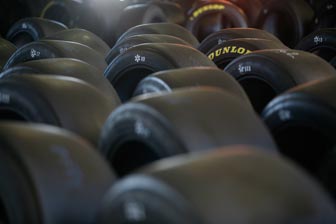 The tyre regulations will be tweaked in 2012

The tyre regulations for next year’s V8 Supercars Championship are set for a shake-up.

With the exception of the long distance races (Clipsal 500, Bathurst and Homebush) and the tyre-sensitive Phillip Island track, it is expected that almost all of the events next year will see both hard and soft tyres used.

Having been a key topic at the most recent V8 Supercars Commission meeting at Phillip Island,  Speedcafe.com understands that the likely tyre rules for next year could see the soft compound tyre used extensively, with just one set of hard tyres issued to each entry per race.

Dunlop will continue to supply the control soft and hard tyres, having recently re-signed with V8 Supercars to be the control tyre supplier until 2017.

V8 Supercars motorsport manager Adam Perry says that improving the show is paramount, and the plan is to have the regulations sorted after the next commission meeting at Bathurst.

“We’re certainly open for everything. We’re going through a process where we are reviewing all the races we’ve done this year, and the races that we did at the backend of last year,” Perry told Speedcafe.com.

“We’re presenting a paper at Bathurst, and we’re hoping to have them finalised for the commission meeting after Bathurst.”

One thing that is for sure is that the Clipsal 500 Adelaide, Phillip Island, Bathurst and Homebush are likely to be the only races run on the hard tyres.

“Clipsal is a great example. The racing is always good on the hard tyre. There’s really no reason to change it. I don’t think a soft tyre would last here at Phillip Island. I’m sure if you asked Dunlop, they’d say “no way.”

“And Bathurst, you’d probably end up with 12 stops, or more. I can’t see it being something you could use there.”