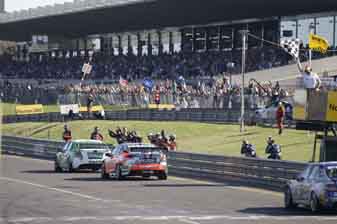 The Sandown 500 looks set to return to the V8 Supercars Championship in 2012.

With V8 Supercars running its traditional pre-Bathurst 500km race at Phillip Island for the past four years, Speedcafe.com has learned that Sandown is in line to get the popular two-driver race back for its September date.

The move would see a switch between the two Victorian venues – with Phillip Island becoming the penultimate event in November.

In other likely 2012 calendar changes, the Clipsal 500 (March 1-4) is expected to become the opening round of the Championship, with the Abu Dhabi event shifting to November – running as the main support act to the Formula One World Championship.

CLICK HERE for the Speedcafe.com story that broke the news in July on the chances of V8s supporting the F1 event at the Yas Marina Circuit.

If the Desert 400 is shifted, any potential deal between V8 Supercars and the Tasmanian Government to resurrect the much discussed Symmons Plains event is likely to require the ‘Apple Isle’ to be visited much earlier in the campaign than its current November slot.

When approached by Speedcafe.com last week, V8 Supercars chairman Tony Cochrane confirmed that V8 Supercars will not discuss details of its 2012 calendar before it is finalised and announced, potentially in time for the Supercheap Auto Bathurst 1000 (October 6-9).

The move by V8 Supercars to return the two-driver 500km race to Sandown will be a popular one with the fans. In Speedcafe.com’s current Pirtek Poll, fans are asked ‘What track would you like to see another two-driver V8 endurance race?’ At the time of publishing, the Sandown circuit had a convincing lead in the poll.

It will be the second time that the V8 Supercars have made a return to the Sandown 500. In 1999, the then-new Queensland Raceway stole the race, staging it for four years. The race returned to Sandown between 2003-2007 before it moved to its current home in 2008.

The ‘Sandown 500’ has been contested by many different categories over the years, but is best known as the curtain-raiser to the Bathurst 1000.

This year’s Sandown event – the Norton 360 Sandown Challenge – will be held on November 18-20.