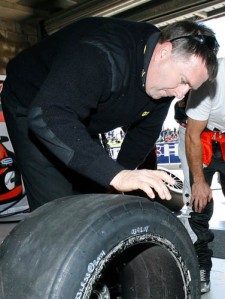 After spending the first 4,000km of its life running on the existing tyre and wheel package, V8 Supercars’ Car of the Future prototype is soon to receive a significant make-over.

The Pace Innovations built prototype will sport its new 18-inch Team Dynamics wheels and Dunlop tyre when ‘Phase 2’ of the testing program kicks off after next month’s Supercheap Auto Bathurst 1000.

CLICK HERE for more details on the ‘Phase 2’ program

With an example of the new tyre having been shown to V8 Supercars teams at Phillip Island, Speedcafe.com’s Stefan Bartholomaeus spoke to Dunlop V8 Supercar operations manager Kevin Fitzsimons for a full update on the firm’s Car of the Future plans.

SPEEDCAFE: The Car of the Future test program will move from 17-inch to 18-inch tyres once the new control wheels arrive after Bathurst. You showed the teams an example of the new tyre at Phillip Island. Tell us about what you’ve got in-store for the test program.

The other tyres initially will be a construction development, to make sure that everything is going alright, especially in terms of feel. Compounds can then be assessed later on – it’s only a chemical additive, so it’s the kind of thing were we can just sit back and make adjustments as we go along. That’ll depend on a bit of direction from V8 Supercars as to what they want to ensure the best racing.

SPEEDCAFE: We understand that the COTF test program will move south once it resumes after Bathurst – taking in Phillip Island and potentially Winton as well. How important is it to test at a variety of circuits, as well as with a variety of drivers?

FITZSIMONS: It’s absolutely critical that we make the tyre live at Phillip Island, because if the construction lives there, it’ll pretty well live anywhere. Ideally it’d be fantastic if we could go testing at Bathurst, but obviously that’s pretty difficult. But certainly the lateral loading we see at Phillip Island is bigger than anywhere else by a long way, so if we can get the casing to react and hang in there for race distances there then we know we’re pretty safe from that point of view.

The critical thing with any control tyre is that safety is paramount. So that means durability, consistency and so on that protects you over the life of the tyre – that’s the most important thing. So hopefully we can get into some development in the very near future and make it all happen.

SPEEDCAFE: Dunlop will obviously have a significant presence at the tests once the new wheel and tyre package is on the car. Will Dunlop Japan be involved in the development process?

FITZSIMONS: I don’t know if they’ll be here for the initial test or not, but once we get into the nitty gritty there’ll definitely be an engineer from Japan here who is involved in GT development and so on. They’ll be after general feedback and go from there. If we can get to test at Phillip Island and then potentially at Winton on the soft tyre relatively close together then that’ll certainly be beneficial to have someone here just for a few days. That’ll depend on if the circuits are available for hire at the times we need them as much as anything.

SPEEDCAFE: Are the requirements for the tyre likely to change considering the revised technical make-up of the cars – with a transaxle, lower weight, independent rear end and so on?

FITZSIMONS: To be honest, not really. The biggest challenge is still the fact that we’ve got to develop a steer tyre that’s also a drive tyre which works across 18 different circuits with various temperature ranges and surfaces. At Winton it can be two degrees for an early morning session, and then we can see up to 50 degrees in the Middle East or Darwin. So it’s very much a compromise in terms of design because the tyre has to do so much.

While the Car of the Future will be lighter than the current car it’s still a relatively heavy race car, and the spool diff makes it a challenge as well, because the car always wants to understeer with the rear end pushing the car on. So it’s a considerable challenge to make it work consistently, but we’re more than up for it.